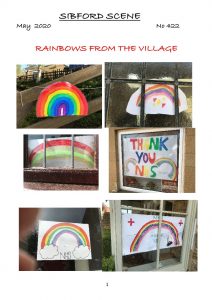 Over the many years that I have lived in Sibford I have been very aware of the wonderful sense of community here and this is more evident now than ever.

I would like you to know that there is an army of “younger” volunteers ready to help those of us who are self-isolating, shielding and lonely. Having attended the meetings online of the Sibford Support Group I am humbled by the positivity and general desire to do so much for others and with so many new ideas and new technologies at their fingertips. There is ready and willing help to get us all through this.

Please do not hesitate to call on your local registered volunteer who will contact any one of the 80+ volunteers to act for you. There is no need for anyone in Sibford to feel isolated and without help at this time.

As we mark the seventy-fifth anniversary of Victory in Europe Day on 8th May the planned commemorations and celebrations have all been cancelled. In these difficult and challenging times, as we observe the government’s ‘Lockdown’ directions, it is good to reflect on those who kept the Sibford villages safe in a different way and at a different time – our very own Dad’s Army.

The Home Guard (initially Local Defence Volunteers or LDV) was an armed citizen militia supporting the British Army during the Second World War. Operational from 1940 to 1944, the Home Guard had 1.5 million local volunteers otherwise ineligible for military service, such as those who were too young or too old to join the regular armed services (regular military service was restricted to those aged 18 to 41) or those in reserved occupations. Excluding those already in the armed services, the civilian police or civil defence, approximately one in five men were volunteers. Men aged 17 to 65 years could join although the upper-age limit was not strictly enforced. Service was unpaid but gave a chance for older men to support the war effort. Their role was to act as a secondary defence force in case of invasion by the enemy forces. The Home Guard were to try to slow down the advance of the enemy even by a few hours to give the regular troops time to regroup. If intelligence reached Sibford Home Guard of any suspected enemy activity locally there was a definite air of nervous anxiety amongst the men!

The photograph from the Sibfords Historical Societies’ archive shows some of the Sibford men who served in the Home Guard. So far it has not been possible to identify where this wonderful photograph was taken so if anyone can help to pinpoint this location in the villages I would be very pleased to hear from them (780259). Led by Cecil Crabtree (in the centre of the front row wearing leather gloves) the group includes many familiar village names:- Lamb, Poulton, Payne, Haynes, Woolgrove, Lines, Spicer, Green, Tanner and Hall. Working during the daytime, these men mounted nightly patrols and kept watch over the village during the hours of darkness whilst carrying out a bit of rabbiting for the pot along the way!

One villager remembers his father being issued with a full face mask and respirator – useful items then and now! A shepherd’s hut at the entrance to the village in Pound Lane became a command post and a roll of entangled barbed wire could be placed across the road to form a barricade and road block. Vehicles were often stopped at road blocks and drivers questioned as to their business.

One memory is of a shot from a twelve-bore gun being fired at the tyre of a vehicle unwilling to stop – the driver soon complied with the request! In the Ferris men from the Home Guard met near to Rymells Corner where Simms’ electrical workshop was during the war years. This is now a residential property known as Westerways. In the Gower the patrols met outside Miss Wyatt’s home – a 3-storey house (now demolished) where Miss Wyatt had a small shop. This is now part of Wyatts Close on Main Street.

The Sibfords also had a Royal Observer Corps post which was sited on the top of the hill on the southern side of the B4035 as you drive from Sibford towards Swalcliffe cutting. The Royal Observer Corps (formed in 1925) was a ‘grassroots’ organisation which had national coverage; The operations of the observation posts during World War II provided the ‘Eyes and Ears’ of the Royal Air Force, reporting aircraft movements in our locality. Their elevated observation post commanded a great view over the surrounding countryside and during the raid on Coventry the fires raging in that city could be seen from Sibford. Sadly, none of these men who gave their valuable service to our village are alive to tell their stories today but we are reminded that at times of national emergency we are all very dependent on volunteers and others to keep us safe. Other villagers served in the Armed Forces away from the village – we remember them all with thanks and pride.

Absolutely nothing is going on in the Sibfords in May

BUT – clap your hands, blow your horns, sound your sirens on Thursday at 8pm!!!!! 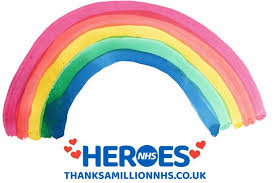