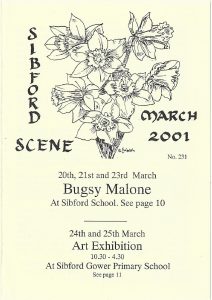 A New Year's honour for Sibford

Congratulations to John Millband, for whom the New Year Honours brought a well-deserved OBE ‘for services to the community in Nepal’. John and Jean Millband have had their home in Sycamore Close, Sibford Gower, since 1986 but for the last 10 years have spent much of their time in Nepal.

John is a roads engineer and he has been helping the Nepalese government to decide how the money offered by rich countries for road building should be used for the greatest benefit to the community. Nepal is a mountainous country with few roads — they are all tremendous walkers. But new roads are easily washed away, so there is a temptation to build to a much higher standard than is warranted by the potential traffic. And roads built with the best intentions can sometimes have unfortunate results, for example if the village population decides to leave for the fleshpots and overcrowded tenements of the capital, Kathmandu.

The right course can be difficult to see and even more difficult to follow, as the roads department faces pressure from all quarters — local and inter- national, political and commercial. John, having acquired a thorough knowledge of the terrain and people’s needs, was able to provide the sort of calm and unprejudiced assessment of advantages and risks which greatly strengthened the hands of local civil servants and politicians.

John went to Nepal for Banbury-based consulting engineers TP O’Sullivan (of which he was a partner until the company was absorbed into the WSP Group in 1997) and thanks to him the contract was repeatedly renewed. Jean worked for a time in a local school. “The people are so kind and so honest”, she says, “but all the same, it was 10 years in quite a hard posting.” Although John is now officially retired and they will spend most of their time in Sibford (and around – they are keen long distance cyclists), the Nepalese have asked him back for a series of short monitoring visits over the next couple of years.

John Millband follows a trail from Sibford to the Indian sub-continent pioneered by Frank Lascelles, with his pot of Sibford earth under the imperial throne at the Calcutta Durbar. John’s mission has lasted somewhat longer and his impact will he more durable, if less spectacular. It is a pleasure to see such solid and useful work in remote places properly appreciated by governments both there and here.