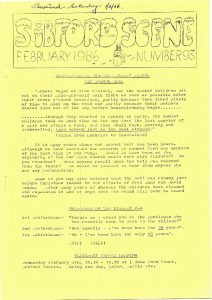 The Blaize goes on

Hip Hip Hurrah!! I am sure that many people in the village share my relief that the Bishops Blaize is no longer up for sale as a private house. It has, without doubt, one of the most attractive settings of any pub, and I well remember those perfect summer weekends of ’83 and ’84 when the whole village seemed to be relaxing in that beautiful garden. Good luck to Phillip and Mary. I hope they can now win back the customers lost over the past few months.

It makes me stop  and realise how fragile a small village community like ours is. It only needs a few people to stop using the shop, the church, the pub or the school to put at risk those facilities which keep the village alive.

A most reliable contributor

Geoffrey Law, who died in January, wrote not only Sibford Scene’s column “Jardin” as mentioned elsewhere, but also contributed many interesting and well researched articles on a wide variety of subjects, ranging from Saints Day Customs to a meticulously documented series on the footpaths of the Sibfords.

His support was a great encouragement in the Scene’s infancy, and his elegance and breadth of interest will be sadly missed.

Almost a whole week before the whole village was made sad by the news of the death of Geoffrey Law, the editor received a phone call from Jardin to say that after seven years – more or less as the garden grows – he was planning to hang up his “wellies” and oil his fork and spade before retiring to his conservatory with a book of flowers and some hot toddy to watch others dig and delve, sow and reap and he planned to retire from his monthly contribution of gardening hints.

It was an unforgivable mistake on the part of the Editor that Jardin’s usual article had been omitted from the December issue of the Scene. Full of humility the editor suggested that it be printed in the January edition. “Don’t be a damned fool man!!” (The voice at the other end of the line sounded like the village squire, not at all as one would expect from the humble horney handed Adam of the earth!) “Don’t be a damned fool man. It’s out of date – no use at all now – the times past and lost”. Humbled, the editor suggested one last article for January – no joy. “Tell you what me dear chap. Here’s a bit of advice you can give the fellows for January. Tell ’em to buy a good gardening book and a seed catalogue, then sit by the fire and read ’em. Tell ’em to keep their big heavy feet off the land and give it time to breathe. We all need to rest you know.”

It was advice born from a prophetic understanding, and a calm acceptance of nature.

So Jardin and the magic of his colourful garden fades from our scene with his customary chuckle, good nature and forgiveness.

Thank you Jardin; we shall remember your interesting articles and the lovable man that penned them with such precision.