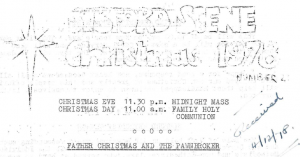 On December 12th at 2.45 in the Village Hall, the W.I. are putting on a play “Strawberry Jam”. Everyone is invited, particularly former W.I. members. Entrance 20p includes tea and cake. 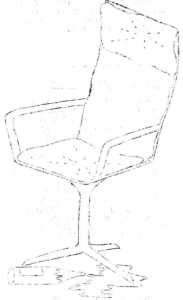 To the music of Mastermind and with standing room only, the 21st Anniversary Village Hall Quiz began.

You might have mistaken it for a race course to see the captains waving their arms to communicate their position in the draw to their teams. And with speedy changeovers, the wizardry of Keith Hicks’ electronic scoring, and microphones that worked without any blowing or banging, the quiz moved at a gallop with never a moment to be bored.

The audience of course knew all the answers, sometimes with unanimous inaccuracy. Dr Agnew identified his own house, but the P.T.A. didn’t know the school bell tower. Dame Anne got the D.F.C. and the Methodists didn’t get the winner of the Grand National, (“We’re Methodists”, they said) and we all hummed the Choral Symphony. And the winners – the Parish Church team of Dame Anne Stephens, Mrs Stroud, John Mulley and the Rector, hotly pursued by the W.I. and Horticultural Society.

After the presentation of the Eric Flinn Cup by Norman Coxon we enjoyed wine and cheese and a fascinating cameo in sound of the original opening celebrations. The health of the Hall was drunk in champagne provided by Dr Agnew, chairman of the committee when the Hall was built. As he said, “However widely people travel, Sibford is the place they like to come home to.