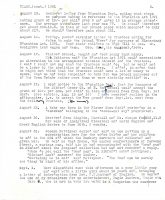 Herr Slapoffski came this afternoon in a poor little pony and cart with a little girl about 12 years old, bringing a letter of introduction from Rev F.E. Garrard of Brailes. He wanted the use of my schoolroom for an entertainment, Magic Lantern, Music etc.

Herr S., who is now in very low water, is a Hungarian who came over as a political refugee with Louis Kossuth in 1849, and settled in Oxford where for many years he gained a good living as a teacher of various musical instruments, a dealer in ditto, and a band master. He saved £3000 and lived in his own house. About 18 years ago he married a lady much younger than himself. He invested his savings in the Oxford Building Society which failed some 10 years ago and caused great consternation and distress. Poor “Slap”, as he was always called by Oxford men, was completely ruined. His wife became ill and died leaving him with four or five children. He speaks quite like a gentleman and behaves as one. But his clothes are very poor and worn and his hair and beard are quite white. I remember him when his hair and curled moustache were quite black. I told him he might have the school-room tomorrow evening, if he wished, for an entertainment. At first he seemed inclined to accept the offer, but on considering the bad unsettled condition of the weather which together with the harvest work would perhaps prevent his having a good house, he resolved to accept the alternative I offered him, viz. to postpone his entertainment for two or three weeks. I gave him an addressed envelope in order that he might write to me. Bell gave him and his daughter some tea and bread and butter and cake with which they were evidently much pleased. Poor “Slap” said he got very little sleep at night thinking of his troubles.