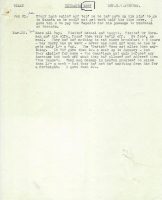 Snow all day. Visited School and taught. Visited Mr Horsman and his wife, found them very badly off. No food, no coal. They had had nothing to eat since breakfast – 8 hours – boy Harry has no work – never has much and when he has he gets only 1/- per day. The “Parish” does not allow them anything. It did give them 2/- a week up to January – but they applied for more – the Guardians not only refused any increase but took off what they had allowed and offered them “the House”. Their son George in London promised to allow them 1/- a week but they had not had anything from him for a fortnight. I gave them 2/-.