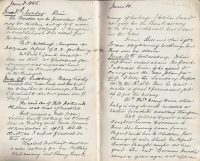 John Adkins called about the pond. I advised him, if he agreed to carry out the new plan for £9 to tell the Sanitary Inspector and the R.S.A. that he could make a good and permanent job of it for the money.

Visited Thomas Henry Hone, whose baby is very ill with measles, or rather bronchitis resulting therefrom.

Visited Widow Wyatt whose daughter Emma Horsman is there ill, having come from Oxford with her 4 children for change of air, which her Oxford Doctor thought might do her good. She had “German Measles” about a year ago, and appears never to have got them quite out of her system.

Visited Thomas Holland and gave his wife 2/6 towards funeral expenses for her child Thomas.

Visited F. Inns who met with an accident on Monday, having fallen down a well on which he was at work. he fell 20 or 30 feet. But the water saved him and he was not much hurt.

Visited Thomas Green who has 3 children down with measles.

Spoke to Ezra Green’s wife, who has just recovered from measles, and who has two children down with them.

Drove Bell and Frank to Banbury.