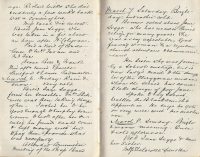 Bright day, but rather cold.

Bonner called about Jane Legge – who has received Parish relief for many years. She was a very respectable, God fearing woman and a regular church attendant and communicant.

Her sister who was formerly a School mistress, but is now lady’s maid to the daughter of the Clergyman under whom she served has come to take charge of poor Jane.

Spoke to boy Jarvis, Walker the Blacksmith’s apprentice. He says he gets on very well with his master now.