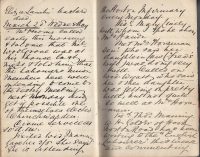 Mr Hiorns called early this morning and told me that Mr Woolgrove was at his house last night and told him that the Labourers Union Members here were intending to come to the Vestry Meeting next Monday and get if possible one of themselves elected Churchwarden.

Visited Widow Manning. gave her 2/6. She says she is attending the Horton Infirmary every Monday.

Visited Mary Lively with whom I spoke about Mrs Hands.

Visited Thomas Manning. W. H. Golder of Hook Norton Road has been writing to the “English Labourer” this week and commenting very severely on Joseph Manning’s conduct as Secretary of the Club.

Visited Mr Woolgrove and arranged with him to go together to Mr Hitchcox tonight and talk over the matter of the Easter Vestry. We went. Mr. Hitchcox expressed a strong desire to retire from the Churchwardenship on account of certain unkind things that had been said about him. I told him I could not hear of it, and that this would be a very unfit time to show the white feather, and make it appear to the Labourers that the “parson” and the farmers could not get on well together. Mr Woolgrove also expressed a desire to be relieved of his office, but agreed to hold on, as this would be a very bad time to change.

I learnt today that W. H. Golder it was who wrote and forwarded me an anonymous letter last year.