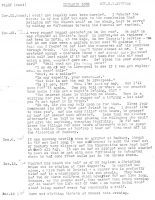 A very ragged beggar accosted me in the road. He said he was educated at Christ’s Hospital in London, was an engineer – had been in India, and at the Cape, in her Majesty’s service – had at one time worn a uniform which cost 70 guineas. I told him I feared he had lost his character and his position through drink. “Ah Sir, don’t throw stones at me, I am wretched enough – Goodness knows – and should have perished with cold last night if it had not been for this old coat which a poor shepherd gave me. God bless the poor shepherd Sir!” “Well what are you doing here?”

“I am on my way to Liverpool to see if I can get employment on board ship.”

“In any capacity, your reverence.”

“But this is not the way to Liverpool.”

“Is it not, Sir? Then I’ve lost my way . But I’ll soon find it again. Can you tell me where is the nearest town where I can get a night’s lodging, Sir?”

“The nearest place is Shipston on Stour. Here is a shilling for you to get supper and a lodging – but mind you do not spend it in drink.”

“Oh no, Sir you may rely upon me for that. Bless your Reverence, you are a good friend to me. I should like to kiss you”, and his eyes filled with tears, he grasped my hand and seemed much affected. Less than ten minutes afterwards I am told he was abusing the villagers who would not give him anything, swearing fearfully. He did not leave the village for some hours afterwards which he spent in the Public House at Burdrop I hear and then went off in the direction of Banbury.