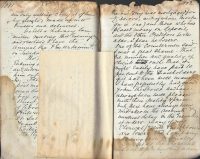 A leaf has been torn out of the diary after December 31. The following entry started there and is probably for January 4.

… the building was mortgaged for £30,000, and of whom Montagu is one) and those who had placed money on deposit, and the other creditors will also, I fear be losers.

One of the countermen said it was a great shame – that the number and quality of clients were such that it might easily have paid 10 per cent to the Shareholders if it had been well managed. I have frequently had good from the Stores and have always been well pleased with their quality and price, but there have always been mistakes in the accounts and unusual delay in the execution of orders. Many of my clerical friends and neighbours are losers, the company having been originally started as the Clerical Co-op Association – but this name giving offence to many it was changed to the “Universities.”

The stock, about £20,000 in value is now being sold to shareholders and ticket holders at discounts varying from 10 to 40 per cent on store prices.

I called at the office of Robert Brown’s employers Grey Prideau and Co, in Lincoln’s Inn fields, having obtained his address from Mr Wright at the Mutual Loan Fund Office, and arranged to meet him at the Ludgate Hill Station at 6.15 pm. We met and went to Bushey Villa together where I stayed for the night.