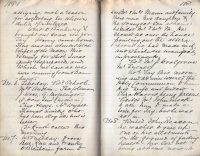 Visited John Reason. He wishes to give up one of his allotments on the grounds of failing health – his son not being at home now to help him, and as he had done some work on the piece preparing half of it for corn he wanted 5/- from his successor. I told him that was quite against the Rule – bad as the rule is as I told him we could not improve on it in the management of allotments because it seemed necessary that the landlord should be entirely unfettered in the choice of tenants. But as he is badly off, being unable to work only occasionally I gave him 5/- on the distinct understanding that it was to be considered a free gift, and in no way as a payment for “acts of husbandry” on the allotment. I appointed Joseph Messenger of Sibford Gower as the tenant.

Distributed tickets for Charity Clothing in School room this evening. In former years the Clothing has been distributed in March or even later – but thinking it would be more serviceable before Christmas than after I have arranged for Mr Dean to send out the goods next Friday. I gave them all distinctly to understand that the present distribution was instead of the usual spring one.

One of my servants came to me this morning and said that “Mrs Smith” of Shipston-on-Stour wished to speak to me. I did not know any person of that name and address, but went to the door and saw a female tramp who began at once to beg, addressing me as “Your Reverend”. In reply to my questions she said her husband had had no work for a long time but that now he had got some the other side of Banbury and they were going there. I told her I had enough to do to help my own poor people and that I made a rule of refusing to assist outsiders coming in that way, that she had come out of her road if she wished to get to Banbury. In reply to my enquiry whether she had been to Mr. Briscoe, the clergyman of her own Parish, she said she had and that he had been very good to her and had paid her rent so as to save her goods; but that he could do no more for her. I asked her what her husband’s name was, and she replied “Edward Lake”. It did not occur to me at the moment that she had sent in the name “Mrs. Smith”. Then she began to cry and rub herself in the region of the waist saying she felt in such pain as she had not tasted food since yesterday. She would not ask for money, if I would only take pity on her and give her a slice of dry bread to stay her hunger. I could stand it no longer, so I went into the kitchen, my servants fortunately being out of the way, and cut her about a quarter of a loaf of bread and a large piece of cheese and gave them to her. She pretended to be or really was very grateful; but as I was still suspicious, after seeing her away from my door I went into the road and saw her going up the village looking for houses which seemed likely to suit her purpose – at last she stopped at Mr. Tregelles’ and there I presume told them either the same story she told me or some other which seemed to suit her purpose better. When she left their door she saw me watching her and walked rather quickly up Pound Lane.