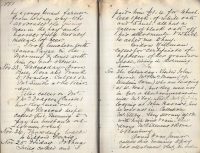 Visited John Harris. Mr and Mrs Mann (of Blenheim Farm) who are lodging at W. Fox’s, but they were not in. Had a short conversation with Mr Fox. Visited Mr G. Dix, lodging at John Harris’s, but he was not in. Called on Mr Elley. Very stormy afternoon with high wind and rain. Vere drove Mrs Stevens and Rosa to Banbury.

David Hone junior called this evening to pay his allotment rent in order to qualify himself for the coal distribution next week. He was full of grumbling and inclined to be rude, especially with regard to having been excluded from the list of recipients of coal and clothing until he had resided in Sibford Gower twelve months. When I took the pains to explain the reasons for these regulations to him, he only became the more bold and rude in his manner. I then thought it time to give him a severe reproof and did so. I reminded him about his wife’s borrowing 6/- from me last June to pay his Club money and that I had shown my anxiety for his welfare by lending it her, though it was quite contrary to my rule to lend money to my parishioners. He replied that he did not know anything of the matter and that the money was not for his club;- but afterwards, relaxing from his rudeness said he would see that I was paid. I must here add that a few weeks afterwards I called on Mrs James Rimell at Rye Hill Farm and she, in the course of conversation told me that the woman had borrowed 6/6 of her at the same time and for the same purpose. I believe she was convicted of theft before he married her, and he has been in trouble two or three times and has been convicted once of a petty theft at Shenington, from which parish (or the adjoining one of Alkerton) his wife comes. He complained bitterly of having had very little work for some time, but I told him that was no reason he should endeavour to treat me with want of respect. The fact is, farmers do not like him about the place, as he is a very disagreeable fellow and has not the character of an honest man.