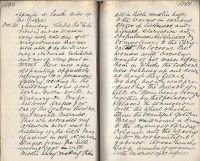 Visited the “Exhibition”, and as it was a very wet and cold day, it was fortunate that we were able to do so. It was only a National Exhibition and not of very great interest. There were a few old paintings apparently belonging to a permanent gallery, residing in the building – some good terra-cotta work – in statuary etc, maps, historic drepes for one of the London theatres, and marble mosaics. That which attracted my attention most was a display of the Silk Manufacture in all its various stages, from the silkworms’ eggs with moths busy making them all in little muslin bags, to the worms in various stages of littleness and bigness, starvation and corpulence, liveliness and somnolence, to the chrysalides, the cocoons, the women with circular troughs of hot water before them in which the cocoons were bobbing up and down as though they felt it too hot, but which was produced by the threads of silk on them being brought together by the operator and placed in connection with the wheel which spun the beautiful golden thread around a drum, to the dyeing of various colours, and the weaving into most beautiful fabrics. At one bench sat a number of women with microscopes before them in which they were apparently examining eggs of the silkworm. There was also a large number of little mortars with pestles in them in which as it appeared to me the old cocoons from which the silk had been removed were brayed. But I could not answer the riddle and consequently, after a time was compelled to “give it up”.

Vere and I were occupied some time in examining the very simple machinery in one of the other courts by which masons lift large blocks of stone to the tops of walls. I think the apparatus is called masons’ “keys”.

There were many troops of school children nearly all girls, and factory women, apparently from the country, passing and repassing through the building. To speak in the mildest way there was very little beauty among them – and as to their style of dress, well – it was neither neat, nor becoming, nor pretty. I never saw such a collection of plain and ill dressed women before. We might perhaps see such in an English prison, perhaps in a workhouse, but certainly nowhere else at home. I am told that the factory workers in Italy are very poorly paid.

Some of the women attending the machinery in motion were a little better looking, but were chiefly remarkable for their head dress which consisted of a sort of silver (or other white metal) fan fastened at the back of the head, the hair being drawn through the centre and there fastened. I am told they were there night and day for as long as a fortnight or three weeks at a time. How they manage to sleep in them I can not divine.

There were some stalls at which electro plating with gold, silver and nickel was going on and which attracted the attention of a considerable number of visitors.

When we emerged from the grounds the choir who are to sing at the closing ceremony tomorrow were assembling for rehearsal. We were not allowed to remain, though for some time we turned a deaf ear to the orders of the soldier who told us to get out, but we stayed long enough to hear a few strains, which convinced us that we would not care to come here tomorrow. We were glad to get back to our hotel, dine, and spend the remainder of the evening in conversation with other travellers in the fumoir.