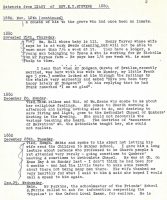 Rain. Mr Perkins, the schoolmaster of the Friends’ School Sibford Ferris called to ask for information respecting the “Physics” in the Oxford Local Examination for seniors. He is out of a situation having been dismissed or requested to resign his position at the Friends’ School. It appears that they have found the place very expensive to carry on. Accordingly Mr Routh (senior) whose health has given way after 40 years service first as Schoolmaster and subsequently as Superintendent, has retired and gone to live in his farmhouse with his son John. Miss Clarke the Matron has left, and so has Mr Perkins the School master. A new Master and Mistress, man and wife, have been appointed to do the work hitherto done by the three. They will thus effect considerable saving on their yearly expenditure; probably not less than £250 to £300 a year. Mr Perkins has not yet succeeded in getting an appointment, and being middle aged, a Quaker, and uncertificated, will probably find a difficulty in getting one. I have offered to speak in his favour to anyone whom he may refer to me.