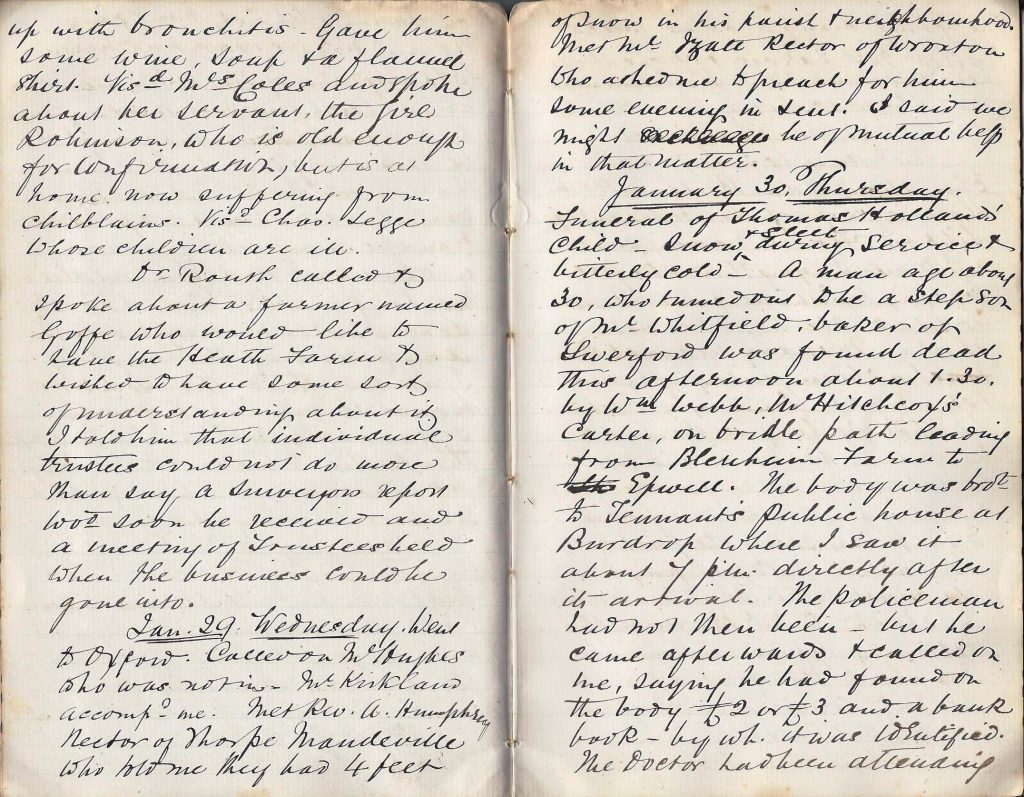 Funeral of Thomas Holland’s child. Snow and sleet during service and bitterly cold. A man age about 30, who turned out to be a stepson of Mr Whitfield, baker of Swerford was found dead this afternoon about 1.30, by William Webb, Mr Hitchcox’s carter, on bridle path leading from Blenheim Farm to Epwell. The body was brought to Tennant’s public house at Burdrop where I saw it about 7 pm directly after its arrival. The policeman had not then been – but he came afterwards and called on me, saying he had found on the body £2 or £3 and a bankbook – by which it was identified. The doctor had been attending the young man for some weeks.

Visited Mrs Jarvis and spoke about her confirmation. She lamented that she was a very poor scholar and could not read very well.

Visited Ann Fox and spoke to her about Ada Bull, Mrs William Harris (wife of the Butcher) of Sibford Ferris having sent up to me saying that the girl was kept without food. Ann Fox said she kept her very short on Monday because she had been guilty of lying and stealing on Sunday. I told her that so long as she had the girl in the house she would be held responsible for her and that if she could not afford to keep her, seeing the father would not or could not pay her, she must either send her home or speak to Mr Bonner the relieving officer about her. I spoke to the girl about her bad conduct and she promised to do better.

I had some loaves (4lb only) weighed in Ann Fox’s shop and found they were good weight, telling her she ought properly to weigh them out to her customers.

Visited Buckingham who is at home with a bad foot. He said his boy had taken up with the Methodists and refused to think of confirmation.

Spoke to Thomas Manning, the Doctor’s boy who said he wished to come to my confirmation class.

Visited Charles Holtom’s wife who said she thought I had come for rent of allotment. I told her I never did that – but that if her husband wished to have the allotment he must pay me the rent for it.