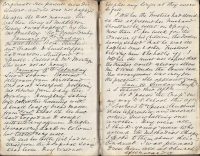 Received telegram from Kirkland who is at Liverpool postponing his return from today till Monday.

Humphrey Sabin’s wife called this evening with a small loaf of bread made from “cone” wheat which her husband begged me to accept without any offence to taste. It was very dark in colour but tasted very well.

She said her little girl had returned from the hospital somewhat better. They could not keep her any longer as they were so full.

I told her the Trustees had decided that at present her husband should not be called on to pay more than 1d per week for the education of his children, the Doctor having stated that he was ill half his time and other Trustees knowing him to be badly off. I told her she must not expect that the Trustees would always allow him to come under the lower rate. The arrangement was only for the present. She appeared grateful.