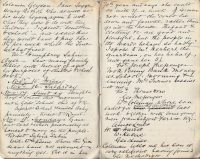 Gave out coal tickets personally at houses to many of the people. Visited Sylvia Sabin, Widow William Keene whom the Guardians have not allowed anything yet. She is in her 70th year and says she could do with 2/- per week. If it were not wicked she “could lie down and faint, rather than go into the house. The food and clothing etc. are plentiful, but the people in the wards behave so badly.” I spoke to Mr. Herbert, the guardian, on her behalf, and gave her 2/-.

Visited also Elizabeth Manning whom I had to reprove for the way in which she spoke of Mrs Routh.