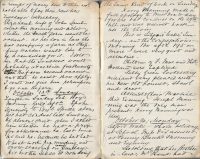 Sibford Wake – whole holiday at School. Miss Dix assisted at Penny Bank morning and evening. She told me that her brother-in-law, Mr Hawe had broken a blood vessel in the throat and that it was feared he would not recover. She was going to her sister’s assistance tomorrow.

Josh Holtom’s of Bilberry Cottage called to pay rent of allotment 6/6 reduced from 7/6 on recommendation of Stewards who say it is worth 1/- a year less than the others.

Mr R Lamb’s 2 elder sons called and submitted to me a report of Temperance Meeting to be sent to the Banbury Guardian. They had prefaced it with a long and rather warm account of the doings of Mr Ker and Miss Cobb in the Gospel tent. I told them I could have nothing to do with the report of their doings and that I did not think they had done good, rather harm, in coming here – etc. etc. The elder of the two young men told me after a time that his father entertained much the same views as myself with respect to the matter.