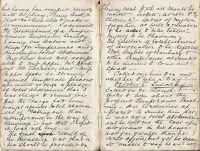 Called on Dr Routh and spoke to him about the proposed Temperance Meeting. His conscience appeared to smite him that he was not a total abstainer – and he told me the cost of intoxicants in his house was far greater than he could afford; but yet he seemed unable to say he would not keep them in his house because of the different people who called to see him. He seemed to think that  total abstinence would not “pay”.

Visited Mr Woolgrove – not in – gone to sale of late Mr Greaves’s effects at Tadmarton.

Told Charles Holtom he might have Job Harris’s old allotment.

Went by invitation to Tadmarton Rectory this evening to hear Rev Mr Crawford read “The Rivals”. There was a large company.