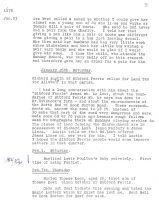 Mrs. West called and asked me whether I could give her eldest son a young man of 20 who lives and works at Temple Mill, a pair of boots. She said he never had a pair from the Charity. I told her that giving a man like him a pair of boots was different from giving a pair to a boy just leaving school. She then said her husband had very little work since Michaelmas and that her little boy wanted a pair very badly and she would be glad if I would give him some. I knew the child, who attends Sunday School, was very badly off in this respect and therefore gave her an order for a pair for him.