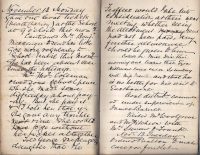 Thomas Aris’s wife of Burdrop and her mother in law wife of old Benjamin Aris came and asked for fresh coal tickets as they had lost theirs. I told them that if it turned out that through this carelessness some one else had taken their coals they would have to be the losers; the charity would not. I gave them new tickets quite with that understanding.

Ezra Hillman called to thank me for what I had done for him in sending him to Eastbourne and said that he had seen Lord Saye and Sele’s name in the list of governors of Brompton Hospital. I therefore wrote to him asking him if he could give me an in-patient’s letter and entrusted it to Hillmann to post.

Mr and Mrs Hitchcox and Mr and Mrs Woolgrove and Misses W and M Dix came to tea, etc.

The churchwardens and myself audited the accounts for the year ended easter last. A balance of £6.11 is due to Mr Woolgrove.