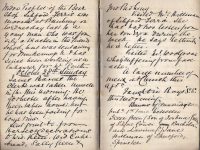 James Barnes the Clerk was taken unwell in church this morning. He got better after having been taken home; but he has been failing for some time.

Visited Mrs Hillman of Sibford Ferris. She has had two letters from her son Ezra during the week. He says he thinks he is better.

A large number of men at church this afternoon.