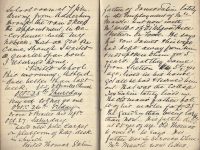 Visited Thomas Sabin father of James Sabin lately in the employment of Mrs Mawle but now with Mr Wilks of Ditchford Hill, Stretton-on-Fosse. He says his son James and his wife had kept away from him and not spoken to him for 5 years. That they came from Stretton 5½ years ago, lived in his house, got all he had and turned him out. That was the cottage James Sabin lately lived in. The old man’s father bought it of his master for £25, the garden then being larger than now. His father died at 85 years of age. Old Thomas is over 80 he says. His father was in service where Mrs Mawle now lives. He never had more than £7 a year living in the house. For 3 years after he was married he had 8d a day as carter. The wife used to earn a great deal more by spinning wool with a “Jazzy wheel” and then knitting stockings.

Visited Widow Keene and John Padbury who has removed from Hook Norton Road to Holtom’s yard next to Hannah Keene. He says Richard Lamb “warned” him out, and that Richard Lamb’s grandfather left in his will that he, John Padbury, was to have the two cottages (Samuel Lines’s and the one he has just left) for life on payment of a certain rent. That he paid Richard Lamb £4.10 a year for the two subletting one of them to Lines. That R Lamb has taken possession of his garden too which his (Padbury’s) father took in from the road 50 or more years ago. I tried to show the old man that most likely he himself was in the wrong and that R Lamb’s grandfather had made no mention of what he had stated in his will. That the encroachment on the road was not justifiable and that he must not harbour any ill feeling against Mr R Lamb.

Widow Prophet of the beer shop, Sibford Ferris was married at Banbury on Wednesday last to a young man who was formerly a teacher in the Friends’ School, but was sent away for drunkenness etc and has since been working as a labourer for Mr Routh.