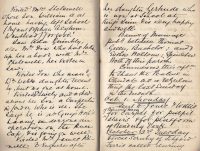 Went over Heath farm this morning with Lewis Poulton and examined the work which has been done. A wall has fallen down since I was here last and it appears never to have been properly built.

Paid Poulton, Carpenter and Fox, painter, for work at the farm. Also Robins of Banbury for Kitchener, etc.