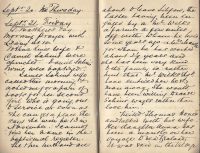 James Sabin’s wife called this morning and asked me for a pair of boots for her second girl who is going out to service as soon as she can get a place. She says she will be 13 in November. I cannot find her name in the baptismal register. She and her husband are about to leave Sibford, the latter having been engaged by a Mr Wilks a farmer a few miles off with whom he lived some years ago. Mrs Mawle for whom he has worked about 2½ years and who has been very kind to the family is rather hurt that Mr Wilks should have enticed her best man away. She would have been willing to raise Sabin’s wages rather than lose him.

Visited Thomas Hone’s and talked with his wife. Her daughter Anna has been a month on her voyage to New Zealand. It was said in the village that she was aboard the “Avalanche” New Zealand ship which was sunk by coming into collision with the “Forest” off Portland last Tuesday night week when both ships were lost and only twelve lives were saved out of 119 on board the two ships. But this was a mistake as Hone had been gone more than a fortnight and sailed from Plymouth whereas both these ships sailed from London.

Elizabeth Gibbs was interred in the “Friends” ground this morning.

Flower show at Swalcliffe Park. None of us went. Last year or the year before young Tarver of the Colony said he had been authorized by the Secretaries to invite Sibford to join and to ask me whether I would take part in it. I said I should be very happy to do so if they would let me know some particulars and I would subscribe towards the prize fund. I heard no more for a time, but Miss Dix told me it had been proposed at the Committee meeting that Sibford should be admitted and had been lost.

The late Jesse Baldwin’s tombstone was put up in the church yard this morning for which I received £1.1.0.

Mrs James Sabin called this evening and I gave her an order for a pair of boots for her girl Alice. She says her hsuband is to be a sort of working bailiff to Mr Willks of Stretton on Foss his new master. The place is about 3 miles from Todenham.

Joseph Gibbs’s son who is a coachman in Liverpool and who came up to his mother’s funeral called this evening to thank us for what we had done for his father and mother.