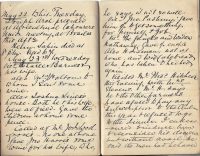 Visited Charles Barnes and his wife.

Also Mrs J Holtom to whom I sent some wine.

Also Joshua Lines’s house. Both he and his wife were at field. Gave the children at home some pence.

Called at Josiah Woolgrove’s – no one at home. Gave Mrs Harris some wine for his wife who, he says, is not so well.

Visited John Padbury; gave him 1/- to get something for himself and Job.

Visited the Goughs and Widow Hathaway. Gave 1/- each.

Also Horsman, not at home, and Widow Cakebread, who has taken to her bed again.

Visited Mr and Mrs Hitchcox this evening with Mrs Stevens. Mr H says he and the other farmers have refused to pay any subscription to the Club this year and refused to go to the dinner. I endeavoured to induce him to reconsider his decision but without avail. He said that the men had behaved so badly they ought to be punished – but that they would resume their portion as honorary members next year if they behaved better. I said the men were not all bad, and that I should go, as an unpleasant duty and do what good I can.