At the Banbury end of Main Street in Sibford Ferris stands a stone, rubble and thatched cottage known as Little London. Many villages in England have the first or last cottage, depending on whether you are entering or leaving the village, named ‘Little London’. This is because this particular house is the nearest residence to the capital city.

In 1998 Little London in Sibford Ferris was bought by Graham Piercey. In a very poor state, he bought it with a view to restoring it using traditional building methods, materials and tools. He spent over five 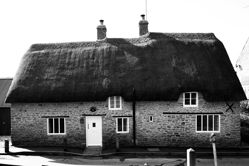 years on his restoration project sensitively restoring the building to its former glory. He found that it had originally been two separate cottages of different ages which had been joined together ’ I with an infill. The newer part was some 100-200 years younger than the older cottage which was dated to the mid-1500s and was the one nearer to the village.

He uncovered a deep inglenook fireplace and bread oven in the newer part. The timbers which were still sound were thought to be original and made from elm and it is thought that there had been an elm wood behind the cottage hundreds of years ago. The window openings were also thought to be original but were in a very poor state with layers of paint holding together the powdered wooden frames. The living room in the older cottage was in a very poor state — the window lintel had failed and when the walls, which had been boarded and bonded with cement and covered in wallpaper were removed, the whole of the end corner of the cottage fell out leaving the rafters suspended in the open air! 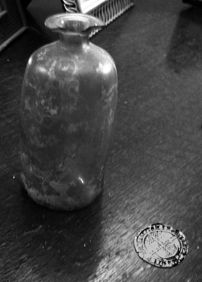 repairing the steeper of the two staircases Graham found a blackened coin and a simple flagon shaped glass bottle. When cleaned, the coin turned out to be an Elizabethan silver Sixpence, dated 1575. It is thought that someone building a dwelling at that time would place a coin of the realm somewhere in the house to bring good luck and prosperity to those who lived there. This coin has helped to date the property to the 16th century. A further coin, dated 1739, was found set into the inglenook fireplace in the newer cottage.

On the beams he found many huge nails which would have been used to hang items over the centuries. There were also many deliberately carved notches which may have been part of a counting or tally system in the past. There was also a metal hook which would have been used to hang a fish-oil lamp — popular in the 18th century as a cheap form of lighting as an alternative to the more expensive tallow candles. On the door lintel and on the timber above there were some very simply carved human figures which may have been ritual marks in connection with magic or witchcraft. 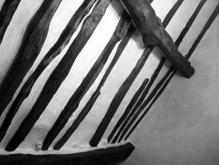 Upstairs the roof timbers are original and included many simple poles in addition to the major timbers. Every part of the tree was used including fibrous stands which tied the thatch into the roof timbers. Elm floor-boarding was found under later Victorian pine floorboards and were also thought to be original. The damaged ones were restored or replaced with new elm boards. Graham spent three years looking for a good source of elm. He eventually found, and bought a section of a felled elm, had it planked and brought to Sibford Ferris from Grantham. Originally the whole of the upstairs of each separate cottage may have been one single sleeping area for a whole family of adults and children. When the cottages were joined the infill area may have formed additional bedroom space between the two existing sleeping areas.

Graham decided to turn this infill area into a bathroom — something that would not have featured in earlier times. Bathing would have been a tin bath in front of the fire and a privy in the garden would have served toilet needs and provided night soil for the garden. He found that the roof timbers in this section of the building had failed — it had been packed with straw and boarded over. Once the bathroom was installed, the kitchen refurbished and a central heating system installed, Graham’s makeover of these two old cottages was complete.

Personal circumstances required Graham to sell his home to a new custodian who also carried out further sympathetic improvements and an extension to the house known as Little London.

The Sibfords History Society published a video about Little London in 2009.