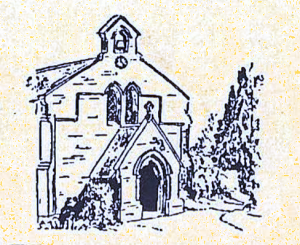 The members of the church of Holy Trinity, Sibford, enjoyed the company not only of their neighbour and fellow villager, the Bishop of Dorchester and his wife but also fellow Christians from neighbouring parishes and other denominations together with a link to the past through the presence of parishioners who once worshipped here at Sibford but who have since moved far afield.

It was a lovely summer evening which encouraged a large congregation to assemble for both the worship of God and also to give thanks for the forsight and generosity of three villagers and farmers in 1840 who laboured to build,this church, once again in Sibford; the previous church having fallen into disrepair and ruins some three hundred years previously.

The church looked beautiful, decorated in a profusion of white and silvan blooms by the members of the church flower roster, so ably organised by Toony Law, who the Rector lovingly referred to as ‘Our Queen of Flowers’.

It was a happy choice to focus on Evensong as the service of thanksgiving. It has much to commend it in its words of soft meditation and thankfulness. Greatly loved and well attended some thirty years ago it has sadly declined in popularity since it finds itself in competition with a badly scheduled Forsyth Saga – the BBC should have known better – shame on it.

Evensong is obviously a favourite service with the Rev. Timothy Forbes Adams for his love showed abundantly in those parts of the service chanted by himself as minister with response from the congregation.

What a happy and thoughtful link with the past for the lessons to be read by Rosalyn Blackmore, daughter-in-law to the Vicar of Sibford 1956-63 and by Susan Stewart whose husband John was Rector here 1970-75.

Our Rector, whose third earthly love after Erica and umpiring at cricket matches (not surprisingly) church music, had prepared for us and rehearsed a most joyful rendering of sound. The choir responded magnificently, and, united on high in the minstrel gallery, sang out their hearts to God while the congregation were bidden to remain seated and silent below!

Mabel, dear Mabel, not to be outshone had assembled her choir of yesteryear, now no longer clad in gym slips and short trousers but with voices as sweet as can, sang a wonderful and joyful Hymn 365 with Mabel, now reinstated in her rightful place, thundering away at her organ!

In his sermon the Bishop of Dorchester took as his text Isiah 40 verse 8 (go on look it up!). He combined an obviously well researched knowledge of our church and its history with a sincere pastoral message and he was listened to with great attention and respect. Evensong is a service of quietitude and it is always sad when it draws to a close but on this particular Sunday the congregation was invited to cross the road to our village hall where Gill Soden and her many helpers had prepared a most welcome and substantial cold supper of meats, salads and lovely, lovely “gooey” puds.

The celebrations were bought to a close by the cutting of a fantastic cake baked and iced in the shape of the actual church building.

The Rector was selected to do the honours, not with a scalpal as would have been fitting, but with the sword once owned by Colonel Colin Frith’s grandfather. The porch was severed with one mighty blow. Had he not chosen the ministry as his mission in life, The Rector would obviously have made a superb cavalry officer!!

So ended a most memorable evening which linked the past with the present and we trust, provided a platform for the future, that the parish of Holy Trinity might continue to accomplish all that our forefathers had hoped and prayed for a hundred and fifty years ago.