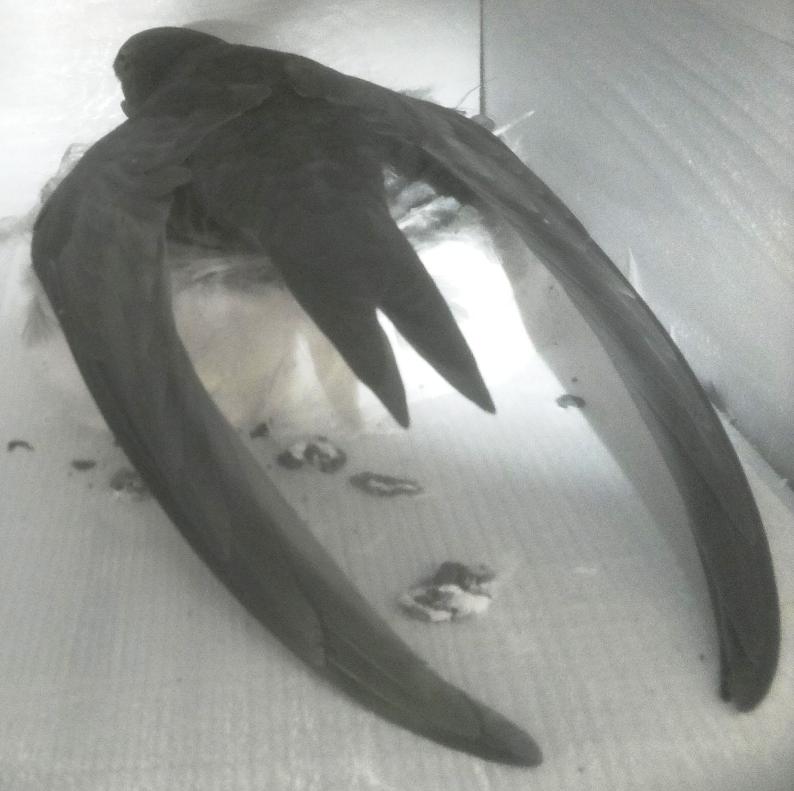 3 August, #1: Our final pair have left us. We hope to see them all again next May. Although we had three pairs laying eggs, only the old-timers in #4 were successful in hatching any; disappointingly, only two chicks resulted, compared to three in each of the two previous years.

2 August, #3: Having give up on their eggs 5 days ago, this pair has spent the last few nights roosting, but are not there tonight. Gone back to Africa!

30 July, #1: It looks as if this pair have given up on their eggs; the photograph shows one egg off to the right of the concave.

28 July, #3: This pair has discarded their second pair of eggs.

27 July, #4: Although their brood has fledged, the parents have been staying in the box overnight for the last few days. But only one of them was in the box last night, and tonight the box is empty.

22 July, #4: The wide-angle lens shows the box completely empty and no shadows from the entrance tunnel. The chicks have flown! They were about 6 weeks old.

13 July, #3: A new batch of two eggs explains why this pair has been so diligent in continuing to sit on the nest, despite the discarded eggs on the floor of the box.

12 July, #1: Surprisingly, the pair that took up residence  a couple of weeks ago are now incubating two eggs!

28 June, #3: The nest is empty, and the eggs are on the floor of the box (see photo – one is almost hidden behind the concave). It seems that the parents have decided that they are not viable.

27 June, #3: We’re concerned about the two eggs. They were laid about a week after #4, so now they must be about a week overdue in hatching. The parents are still dutifully incubating.

27 June, #2: We have seen the occasional visitor in this box, but last night we caught sight of a pair having a good look around together.

27 June, #1: A new prospecting pair took up residence two or three days ago. They are spending nights (and this morning!) cuddling up together.

12 June, #4: In a rare moment when both parents were out foraging, we saw that the eggs have hatched. May have been a couple of days ago. Unfortunately the pictures from this box are somewhat blurred, but it looks like there are only two chicks.

17 May: We watched as a new swift flew up to each of the nestboxes in turn and called into them, finally spending a night in #2 – the first time this box has been used.

12 May: A small screaming party of four swifts entertained us outside this evening. The pair in #4 have been happily cuddling up together every night. And there’s a single bird in #3 again tonight; is it the same one who left 5 days ago, or is it their partner finally returned?

7 May: Our first breeding pair today returned to #4, where they successfully raised chicks last year and the year before. Unfortunately, after 4 nights alone in #3, the first bird of this season seems to have given up waiting for their partner.

3 May: The swifts are back! Well, one is, anyway. This must be one of the prospecting pair that took a shine to nestbox #3 last summer. Let’s hope that their partner makes it back as well before too long.

The nesting boxes are in Sibford Ferris. Revisit this page to keep an eye on progress.