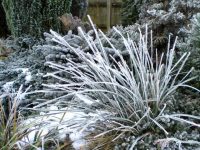 November was another month when extremes of weather provided headline news for different parts of the country. Temperatures ranged from 19 degrees C at the beginning of the month to -10 degrees C by the end of ‘Snowvember’! Heavy overnight rainfall early in the month left parts of the South West in Cornwall heavily flooded with all the ensuing misery and discomfort for the affected householders. Evidence suggested that flood defences did not work, pumps were not switched on, telephone warnings were not received, and ditches and culverts were blocked with debris. Local authorities will have to address these comments but budgetary cuts and savings are bound to have an effect – little comfort to those who will spend Christmas out of their flood damaged homes. By the end of the month daytime temperatures had fallen to sub-zero levels and heavy snowfalls closed roads and schools for days in the north of England and Scotland. The Sibfords received their first snow fall of the winter overnight on the 29/30th – fortunately only a slight amount causing little disruption as the local roads had been gritted and salted. However, the extreme cold meant that those who could remain indoors did so and icy conditions made moving about on foot hazardous.

The Primary School Bonfire and Firework celebrations were held on Saturday 6th November – this date proved to be a good decision because the preceding few days had been very wet including the evening of 5th November. Excited children, parents and friends gathered on the school field to enjoy the sparkling display of fireworks followed by the lighting of an enormous bonfire to burn the effigy of Guy Fawkes made by the children. Excellent refreshments including hot food and mulled wine were served by the PTA ensuring the social and financial success of the evening.

The following evening, as part of the ongoing fund raising for the Church Tower Appeal, many Sibfordians enjoyed a Candlelight Concert in Swalcliffe Church entitled ‘Bach to Bacharach’. The wide range of music was expertly performed on piano, harp and woodwind– a musical treat with drinks and delicious canapés served before the performance. Both Parish Councils met during the month and discussed many and varied local issues including the burial ground, the planned Multi Use Games Area in the Ferris and giving their joint support to the preparation of a Community Plan.

Computer gremlins were abroad in the Sibfords on both the 9th and 10th of November. The Horticultural Society’s lecture given by Timothy Walker entitled Bordering on Insanity should have been illustrated by superb colour slides of the border in question. However, the pictures were minus all red colour due to a computer/projector mal-function so all the flowers, shrubs and trees took on an overwhelming blue hue! Timothy was as entertaining as ever and the glasses of wine and refreshments ensured that everyone enjoyed the last meeting before Christmas. The WI meeting the following day was also affected by technical problems – a different projector but, never-the-less it meant that the talk entitled ‘Village Life in Malta’ could not be delivered. Two members stepped in and described some highlights of holidays they had enjoyed in Malta while the speaker kindly commented on all the entries for the competition – ‘a souvenir from Malta’.

The nation remembered the sacrifice made by so many in both World Wars and subsequent conflicts by observing two minutes of silence at 11 am on 11 November. A Service of Remembrance was held at Holy Trinity Church on the following Sunday. After gathering around the War Memorial and remembering especially those known to us and those from the villages who had lost their lives in service to their country, a service, led by Rev Canon Christopher Hall was held in Church. It was good to see the young people from our Scouts, Cubs and Beavers in church, who, with their parents ensured a large congregation for this special service of remembrance – all the more poignant because of the current and ongoing involvement of our own servicemen in both 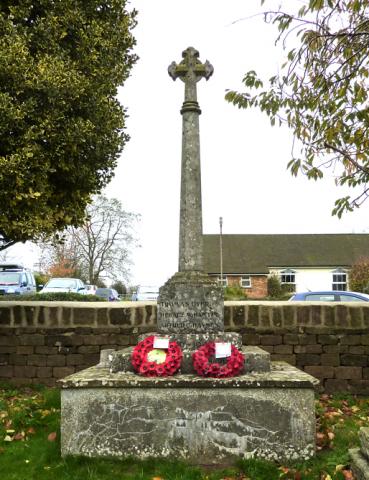 Clubs and Societies met as usual – the Friendship Club started their Christmas Shopping with a trip to Gloucester Quay, the Sibfords’ Society enjoyed a talk on The Origins of the English Parliament which was particularly relevant this year after the formation of the Coalition Government following the general election last May. The Primary School held a very successful Christmas Fayre and there was a Coffee Morning in the Methodist Chapel. The Village Hall committee ran a successful Quiz Night when nine teams competed against each other. A Ploughman’s Supper was served and the winning team this year was led by the Village Hall Chairman! The Life Drawing Classes and Community Reading Group continued at Sibford School and the Rain and Shine Theatre Company returned to present Oscar Wilde’s, ‘The Canterville Ghost. The Gower provided the venue for an exhibition of locally handmade products including fine art, jewellery, ceramics and hand painted furniture. Entitled ‘Test of Time’ the aim of the exhibitors was to inspire people to see the beauty in craftsmanship and tradition and to encourage a change of direction from mass produced to individually produced and sustainable re-use. How fortunate we are that our villages can enjoy such a wide variety of activities and events every month.

The older Primary School Children enjoyed a week’s residential trip in Pembrokeshire where they took part in many and varied outdoor, adventurous activities. It was a full and busy week but according to one of the boys who went, “It was awesome – I’ll remember it for the rest of my life”. As part of the annual Children in Need Appeal supported by the BBC, many events and fund raising activities took place during the year and on the dedicated day – 19 November. The Primary school children had a fun day wearing fancy dress and their cooking activities making cakes to sell to their friends was filmed by BBC Oxford and was included in the local news coverage on television. All the school children are now preparing for their Christmas productions while the Warriner Choral Group is rehearsing for their performance of Handel’s Messiah next month.

So, the countdown to Christmas has begun for another year – how quickly it comes around. There are numerous opportunities to shop at local village Bazaars, Fayres and Markets, the Christmas Lights have been switched on in Banbury and we are reminded of the final dates for posting those Christmas cards to family and friends overseas.