The warm and mainly settled weather for most of July was replaced with dull, unsettled days, copious rain and very little sunshine – 40% below the long term average for August in the UK. Although many beach holidays were rain affected, particularly in the west of the country, we were constantly reminded through our newspapers and TV screens that other parts of the world were experiencing untold devastation due to torrential rain and mudslides. The whole of Pakistan was affected by serious flooding causing loss of life, both human and animal. Whole communities were cut off, due to the damaged infrastructure and became reliant on air drops for fresh water and foodstuffs. Water borne diseases became a major worry for all the aid agencies and the world was asked to give generously to support the aid efforts for the poor beleaguered communities in Pakistan, India and Bangladesh. Similar downpours also brought major mudslides in China, bringing a high number of deaths and homeless families. The changes to the movement of the Gulfstream also affected Russia as daily temperatures repeatedly soared above 40 degrees Celsius. These had serious effects on the population and eventually resulted in major forest fires. Many poor quality cereal crops were lost and those already harvested were of very low yield so Russia banned all wheat exports so that will have a major impact on the supply and price of grain to the rest of the world.

The WI was unfortunate to have a wet day for their annual outing to visit the Vyne House – a National Trust property near Basingstoke in Hampshire. However, the 31 members, husbands, friends and guests who travelled by coach enjoyed the magnificent house. The house was built in the early 16th century for William Sandys, Lord Chamberlain to Henry VIII. In 1653 it was bought by Chaloner Chute and remained in the Chute family until it was bequeathed to the National Trust in 1953. Visiting the extensive grounds and gardens would have to wait for a drier day but Sibford’s visitors enjoyed lunch and afternoon tea in the Brewhouse restaurant before returning home.

The Churchyard Working Parties continued delving deeper into the brambles which had been invading the lower parts of the churchyard but the man-hours of work were having a visible effect restoring order and neatness to the environs around the Church. A fund raising Coffee Morning was also hosted in a garden in the Gower and £151 was raised for Church funds. The weather was kind and those who attended enjoyed a sociable morning in the lovely surroundings.

The following day the annual Bert Gilbert Memorial Cricket Match was held at Sibford School. Bert Gilbert umpired the village cricket team for many years until ill health prevented him from continuing to do so. Two of his sons played for the Sibford team and his grandson continues the family involvement by still playing for the side. The match is now very much part of the village calendar with a team from the Gower playing a 40 over match against a team from the Ferris. It is played in a great spirit with each bowler only allowed six overs and each batsman having to retire after scoring 25 runs ensuring that everyone has a chance to shine! The ‘retired’ batsmen can only add to their score after all the remaining batsmen have completed their innings. Each batsman goes out to the wicket to a piece of music especially suited to his personality – as judged by his fellow teammates! This led to lots of amusement and added to the light-hearted manner in which the match is played. During the afternoon a raffle is held and monetary fines are imposed on players for any blemishes in their performance. All money raised is sent to the British Heart Foundation in Bert Gilbert’s memory.

This year the Ferris batted first and made a good score. After an excellent tea the Gower’s reply was some 30 runs short at the end of their 40 overs so honours went to the Ferris team this year. Both teams received great support from the many villagers who enjoyed a great afternoon in the sunshine. Afterwards many retired to the Wykham Arms (sponsors of Sibford Cricket Club) to continue celebrating this most enjoyable village occasion.

When weather permitted the Sports Youth Activator sessions for 11-16 year olds were enjoyed in the field behind the Village Hall and the younger children, aged 5-11, were catered for with a weekly Sports Roadshow at the Primary School.

The not-so-young members of the Fielding Day Centre continued their weekly Lunch gathering each Wednesday throughout August, sometimes meeting in the Village Hall, the Pub or in the home of a kind villager who provide a delicious lunch and homely hospitality. These special occasions are always enjoyed by the members who are transported by volunteers who stay on for lunch and a chat.The annual outing for Fielding was arranged for the 25th August – yes, another thoroughly wet day! However, spirits were not dampened as wheelchairs and walking frames were loaded onto the Banbury Community Transport vehicles. 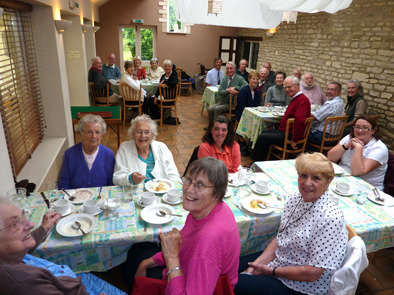 These are vehicles specially designed to transport elderly people safely and easily. We travelled an interesting and scenic route to Friar’s Court in Clanfield – a moated house near to the River Thames in the south of the County. There have been buildings on the site since 1149 when the Monastic Knights of St John founded their first Hospitallery in Oxfordshire. We had hoped to visit the 4acres of gardens and grounds but heavy rain confined us to the comfortable restaurant and lounge where we enjoyed a delicious lunch. Instead of our planned garden tour our host gave us an interesting talk about the history of the house and the changes that had taken place over the years. After a wet ‘dash’ to the small but well stocked shop we returned for afternoon tea – delicious scones, jam and cream before returning to Sibford through the large puddles which had built up even on the main roads. It had been an enjoyable outing – lots of fun and conversation and a lovely way to spend a very wet day – among friends. 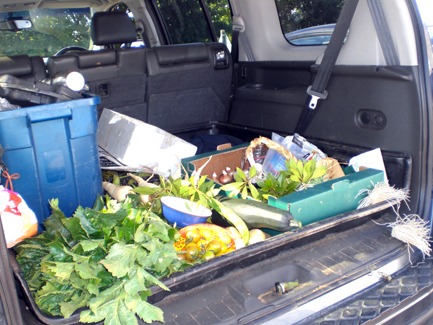 That same Wednesday evening was the entry night for the Village Flower Show to be held on the following Saturday. Villagers made their way to the Village Hall comparing stories of rain affected gardens -flowers which might not make it until the weekend and of fruit and vegetables that might have been. Although entries in the various classes was down on last year, those who could staged a wonderful display of fruit, vegetables, flowers, handicrafts, cooking, produce and photographs. The children’s classes were especially welcome as we consider the future of these types of village occasion.

We were rewarded with a dry afternoon and after the 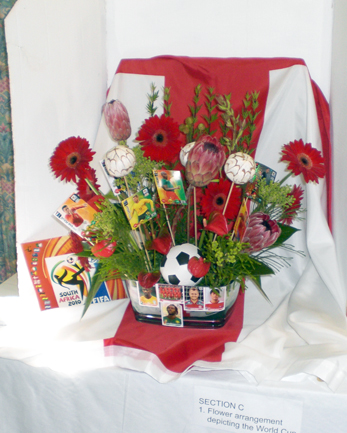 entries had been judged, villagers were able to come and admire the talents of Sibford’s villagers. Many cups of tea were drunk and delicious homemade cakes consumed 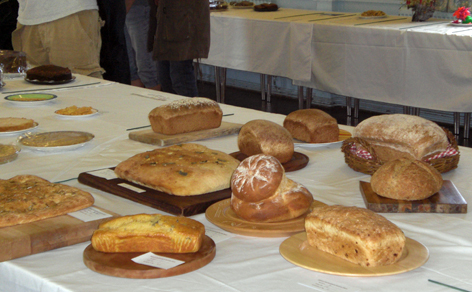 before the awards and cups were presented. A truly ‘village’ day – made possible by all those who organised it and those who had taken part. As entries were dismantled and loaded back into car boots all that remained was for those who had spent hours setting it all up to reverse the process – a long and hard working day for all those closely involved with the Horticultural Show Committee! 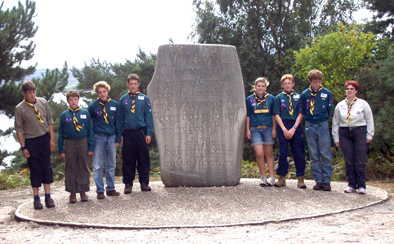 Towards the end of the Flower Show afternoon Sibford Scouts returned home after their week away camping at Butcher’s Coppice – a seven and a half acre Scout campsite near Poole offering a wide range of outdoor activities. Seven youngster, (six boys and one girl) and their two leaders were challenged by the continual wet weather but spirits were high and they enjoyed instruction in rifle shooting and archery. A whole day outing was made to Brownsea Island – an island in Poole Harbour now a wetland and wildlife area managed by the National Trust. It was the site of the first Scout camp run by the movement’s founder, Lord Baden Powell. Despite their wet week away they returned to Sibford by minibus looking smart in uniform and smiling as they put their equipment back into the garage behind the Village Hall.

As a wet August drew to an end (5.25 inches of rain fell during the month), there was a distinct autumnal feeling 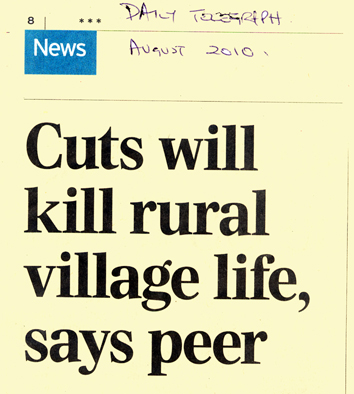 to the early mornings and evenings reminding us that summer was receding, school rooms were being prepared for retuning pupils and the government’s much publicised spending review was just not far away. The Treasury had asked all Whitehall departments to find savings of up to 40%. Commenting in the national press, Lord Taylor of Goss Moor – a Liberal Democrat peer suggested that the impact of such savings on the country’s 3000 rural villages and rural hamlets, home to 6.16 million people, could reduce vital services and drain the lifeblood from those villages. He suggested a more prominent role for parish councils and a reduction of red tape to make it easier for local people to take control of their own services. Such localism could provide a real opportunity for rural communities to save the money the government needs to save – let us hope that will be the case. Otherwise local villages will be reduced to ‘bricks and mortar’ if their lifeblood is drained away.