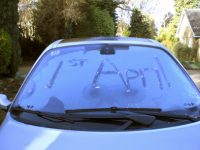 All Fool’s Day and Maundy Thursday duly arrived together on 1st April but the overnight frost was no April fool’s joke – windscreens had to be scraped before the villages’ commuters could leave for work. Easter holidays arrived for the Primary School children and many of them joined in an Easter Egg Hunt organised by the Village Hall committee on Good Friday. All young finishers were rewarded with chocolate after they had completed a trail around the villages.

The Church communities were busy on Saturday morning decorating the Church and Chapel to celebrate Easter Day after the flowerless days of Lent. A beautiful Easter Garden was constructed and mounted by Ian Warden depicting the 3 wooden crosses, an empty tomb and figurines depicting those who visited the garden looking for the body of their crucified Lord. The Church looked beautiful with many floral arrangements spectacularly highlighted by rays of sunshine passing through the coloured stained glass windows above the altar. The Simnel cake prepared during the Mothering Sunday service had been baked and decorated and was served with refreshments after the Communion Service. The Chapel too was beautifully decorated and a large wooden Pascal cross decorated with flowers was mounted in the entrance garden – Hallelujah!

The village was sparkling in the bright sunshine but Wheathills field was without its usual springtime lambs – although born, it was too cold and the lower part of the sloping field was still very wet, so the ewes and their babies were being kept in the shelter of their barn.

On Tuesday 6 April the Prime Minister, Gordon Brown, confirmed that the much anticipated date of the General Election would be one month later on 6 Thursday May. This was the date that had already been notified for local Parish Council elections so these were rescheduled until 27 May. Fortunately a secondary raft of polling expenses was avoided as both village’s Parish Councils were uncontested elections and councillors would, therefore, serve their communities for another 4 year period.

Democracy at grass roots level involved residents of both Parishes attending an unprecedented joint public meeting in the Primary School to discuss the District Council’s Draft Plans to provide a total of 250 homes in five Banburyshire villages by 2026. Sibford Ferris, Sibford Gower and Burdrop were grouped together and would be considered for development as one of the five nominated villages. After presentations by both Parish Councils an open forum followed to discuss the village’s response to the District Council. Although the need for some development was accepted it was felt that the Sibfords, being remote rural settlements could only sustain 10-20 new homes and other local, cluster villages should also be included to share the additional housing requirement. A strongly worded joint response was prepared and submitted to Cherwell District Council.

A fund raising Coffee Morning was held in Holy Trinity Church and a group of actors – all well-known for their work with the Royal Shakespeare Company, TV series and films – from the Sibfords and surrounding villages, offered their services in aid of the Swalcliffe Church Tower Appeal. The Church was full and the audience was treated to a delightful selection of words and music entitled, “Whatever the Weather!” Whenever two Englishmen meet their first talk is of the weather…. Due to the success of this and other fund-raising events some £130,000 had been raised to date and the first phase of work on the church tower can begin. However, a further similar sum of money still needs to be raised to complete the restoration work to the tower of this beautiful old church.

The Woman’s Institute held its Annual General Meeting, the Horticultural members learned how to prepare hanging baskets and outdoor pots for summer planting and the Sibfords’ Society learned about the history of the Aluminium Works in Banbury from 1929-2009. Sibford School hosted a Triathalon event, an Open Day for prospective students and announced a Community Education programme to make full use of their excellent facilities. Volunteer villagers took part in the annual Cherwell District Council’s Litterblitz campaign to collect debris and litter within both the villages. It was great to see some young people helping in the clean-up process.

On 18 April, following a major eruption of the Volcano Eyjafijallajokull in SE Iceland, a huge plume of dangerous volcanic ash was projected high into the stratosphere. Although little impact was felt at ground level it created an unprecedented no-fly zone across much of Europe. All aircraft were grounded for 6 days creating havoc for travellers leaving passengers stranded all over the world. Some families were unable to return home in time to return to work or school after Easter holidays taken abroad and the disruption continued for some stranded passengers until May due to the backlog of flights. The Community Playbus which visits Sibford Village Hall car park on Mondays was not able to come for the rest of the month as the driver was still awaiting a flight back from the USA. Overseas competitors for the annual London Marathon were affected by the travel constraints and many had prolonged and difficult journeys to the UK, but a villager from Sibford Gower completed the 26 mile course in a very creditable 2 hours 55 minutes – the fastest time for his age group.

An exhibition and auction of original art, which had been donated by local professional artists, was organised by a villager and the considerable sum raised, in excess of £10,000, was donated to our local Katharine House Hospice. Several villagers, together with other members of the Warriner Choral Society, performed with professional soloists and the Akeman Chamber Orchestra in the Church of St Peter and St Paul in Deddington. The concert of sacred choral music, including Vivaldi’s Gloria, was hugely enjoyed by those who took part and audience alike.

April was an exceedingly dry month with several weeks without rainfall but towards the end of April we enjoyed warm temperatures – up to 20°C. However, with the approaching Bank Holiday weekend temperatures were forecast to tumble into single figures again with much needed rain to dampen the May Day and Bank Holiday celebrations.